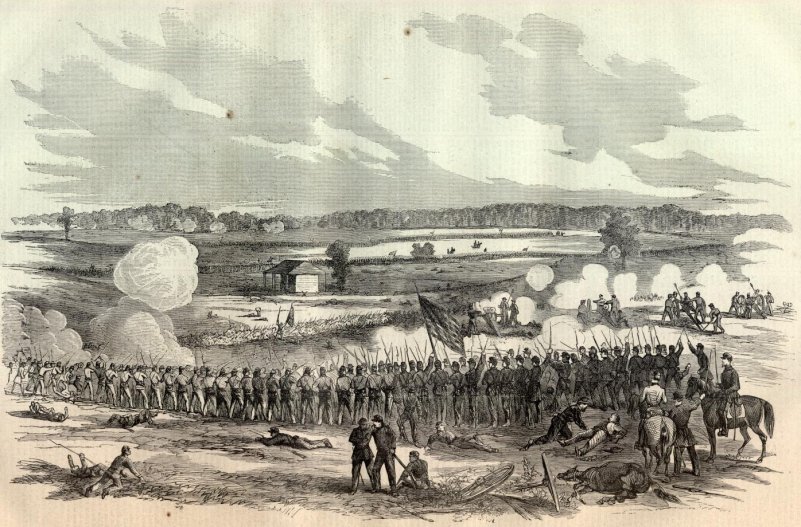 The Battle of Perryville as depicted in Harper's Weekly

Confederate Gen. Braxton Bragg's autumn 1862 invasion of Kentucky had reached the outskirts of Louisville and Cincinnati, but he was forced to retreat and regroup. On October 7, the Federal army of Maj. Gen. Don Carlos Buell, numbering nearly 55,000, converged on the small crossroads town of Perryville, Kentucky, in three columns. Union forces first skirmished with Rebel cavalry on the Springfield Pike before the fighting became more general, on Peters Hill, as the grayclad infantry arrived. The next day, at dawn, fighting began again around Peters Hill as a Union division advanced up the pike, halting just before the Confederate line. The fighting then stopped for a time. After noon, a Confederate division struck the Union left flank and forced it to fall back. When more Confederate divisions joined the fray, the Union line made a stubborn stand, counterattacked, but finally fell back with some troops routed. Buell did not know of the happenings on the field, or he would have sent forward some reserves. Even so, the Union troops on the left flank, reinforced by two brigades, stabilized their line, and the Rebel attack sputtered to a halt. Later, a Rebel brigade assaulted the Union division on the Springfield Pike but was repulsed and fell back into Perryville. The Yankees pursued, and skirmishing occurred in the streets in the evening before dark. Union reinforcements were threatening the Rebel left flank by now. Bragg, short of men and supplies, withdrew during the night, and, after pausing at Harrodsburg, continued the Confederate retrograde by way of Cumberland Gap into East Tennessee. The Confederate offensive was over, and the Union controlled Kentucky.