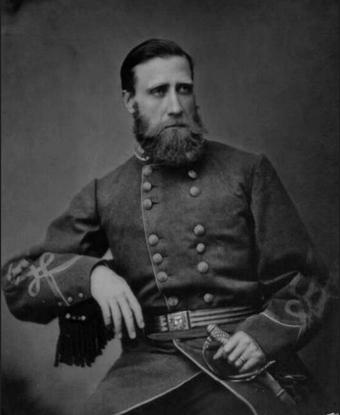 John Bell Hood holds the distinction of being one of the most rapidly promoted leaders in the Confederate military forces during the Civil War. Born in Owingsville, Kentucky in 1831, he pursued a military career early on, graduating from West Point at the age of 22. When war officially began in April, 1861 Hood was unwilling to either continue to serve in the United States army, or to maintain the neutrality of his native Kentucky. He decided instead to resign his commission in the US military and became a Confederate Cavalry Captain. He was soon promoted to Colonel, commanding the Texas 4th Infantry.

On February 20, 1862 Hood was elevated to brigade command in the Confederate Army of the Potomac, whereupon he was promoted to the rank of Brigadier General 11 days later.

Hood distinguished himself as commander of what had come to be known as the "Texas Brigade" during the Peninsula Campaign, firmly establishing his reputation as an aggressive commander who was willing and even eager to personally lead his troops into combat.

He performed especially well at the Battle of Gaines' Mill on June 27, 1862 in which he led his brigade in a charge that broke the Union line and helped to carry the day. Though he, himself, escaped injury, every other commissioned officer in the Texas Brigade was killed or wounded.

Following the Seven Days Battles, Hood was promoted to division command and subsequently led a division in Maj. Gen. James Longstreet's First Corps in each of the campaigns of 1862 thru 1863.

He demonstrated his skill in leading this division during the Northern Virginia Campaign when he became one of the primary leaders of shock troops during the large assault on Pope's left flank at the Second Battle of Manassas, an assault which nearly destroyed the Union army.

As he pursued Union forces in retreat from the field, Hood became embroiled in a dispute with a superior officer involving captured ambulances. In response Longstreet had Hood arrested and then attempted to have him court-martialed

During the opening phases of the Maryland Campaign Hood remained in the rear in virtual arrest. Just before the Battle of South Mountain, Hood's Texans implored Gen. Lee: "Give us Hood!" Despite Hood's continued refusal to apologize for his conduct, Lee intervened and decided to overrule Longstreet and restore Hood to command.

During the Battle of Antietam, Hood's division came to the relief of "Stonewall" Jackson's corps on the left flank of the Confederate line, arriving in time to turn back an assault in the West Woods by the Union I Corps. His division subsequently engaged the Union XII Corps and sustained 50% casualties in the ensuing fighting.

That evening, after the battle had come to a close, when Hood was asked by Lee where his division was he responded, "They are lying on the field where you sent them. My division has been almost wiped out."

Jackson was so impressed with Hood's performance at Antietam that he personally recommended his promotion to Major General, which was made official effective October 10, 1862.

Hood went on to lead the assault on the Union left flank at the second day of the Battle of Gettysburg. He was wounded during this assault, rendering his left arm useless for the remainder of his life. Hood was wounded again at the Battle of Chickamauga, this time requiring the amputation of his right leg. Even so, he went on to command an army during the Atlanta Campaign and the Franklin-Nashville Campaign, though his performance at that level of command was notably less successful than as a division commander.