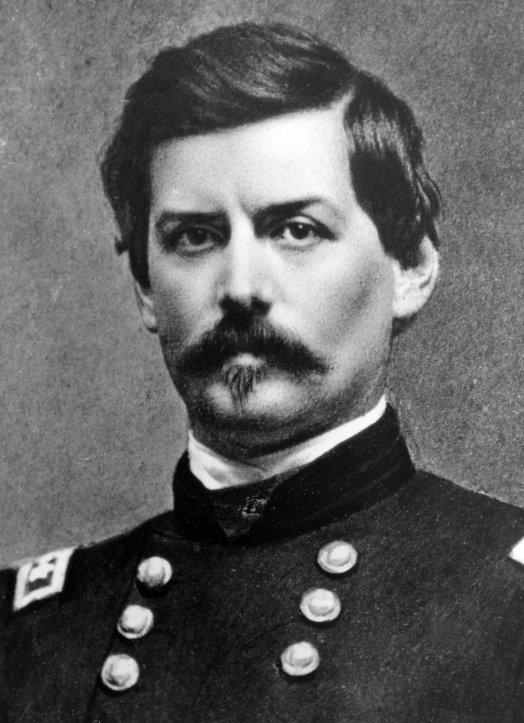 George Brinton McClellan (December 3, 1826 – October 29, 1885) was an American soldier, civil engineer, railroad executive, and politician. A graduate of West Point, McClellan served with distinction during the Mexican–American War (1846–1848), and later left the Army to work in railroads until the outbreak of the American Civil War (1861–1865). Early in the conflict, McClellan was appointed to the rank of major general and played an important role in raising a well-trained and organized army, which would become the Army of the Potomac in the Eastern Theater; he served a brief period (November 1861 to March 1862) as general-in-chief of the Union Army.

McClellan organized and led the Union army in the Peninsula Campaign in southeastern Virginia from March through July 1862. It was the first large-scale offensive in the Eastern Theater. Making an amphibious clockwise turning movement around the Confederate Army in northern Virginia, McClellan's forces turned west to move up the Virginia Peninsula, between the James and York Rivers, landing from the Chesapeake Bay, with the Confederate capital, Richmond, as their objective. Initially, McClellan was somewhat successful against General Joseph E. Johnston, but the emergence of General Robert E. Lee to command the Army of Northern Virginia turned the subsequent Seven Days Battles into a partial Union defeat. However, historians note that Lee's victory was in many ways pyrrhic as he failed to destroy the Army of the Potomac and suffered a bloody repulse at Malvern Hill. Historian Stephen Sears in To the Gates of Richmond notes McClellan's Army of the Potomac inflicted 20,204 losses while only sustaining 15,855 themselves. McClellan's army would be withdrawn from the Peninsula in August 1862. Military theorist Emory Upton noted at the time that "The worst that could be said of the Peninsula campaign was that thus far it had not been successful. To make it a failure was reserved for the agency of General Halleck."

General McClellan failed to maintain the trust of President Abraham Lincoln, and did not trust his commander-in-chief and was privately derisive of him. McClellan was removed from command in November in the aftermath of the 1862 midterm elections. This decision contributed to McClellan's supposed failure to decisively pursue Lee's Army following the tactically inconclusive but strategic Union victory at the Battle of Antietam outside Sharpsburg, Maryland. Future commander of the Army of the Potomac George Gordon Meade noted in his letters that the decision was for political rather than military reasons. Even critics such as William Swinton lamented the timing of McClellan's removal: "The moment chosen was an inopportune and an ungracious one; for never had McClellan acted with such vigor and rapidity—never had he shown so much confidence in himself or the army in him." McClellan would never receive another field command and went on to become the unsuccessful Democratic Party nominee in the 1864 presidential election against the Republican Lincoln's reelection. The effectiveness of his campaign was damaged when he repudiated his party's platform, which promised an end to the war and negotiations with the southern Confederacy. He served as the 24th Governor of New Jersey from 1878 to 1881; eventually became a writer, and vigorously defended his Civil War conduct.

Most classic histories have presented McClellan as a poor battlefield general. In recent decades, however, this view has been challenged. Some historians view him as a highly capable commander whose reputation suffered unfairly at the hands of pro-Lincoln partisans who made him a scapegoat for the Union's military setbacks. In particular, McClellan's role in the Maryland Campaign has undergone a positive reassessment. Notably, after the war, subsequent commanding general and 18th President Ulysses S. Grant was asked for his opinion of McClellan as a general; he replied, "McClellan is to me one of the mysteries of the war."