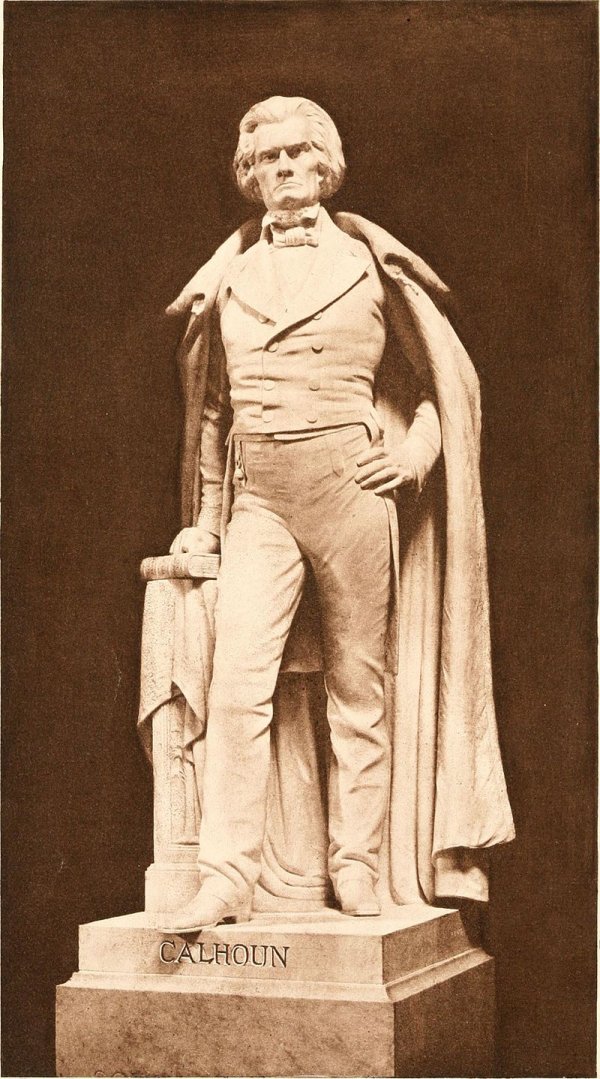 John Caldwell Calhoun (March 18, 1782 – March 31, 1850) was an American statesman and political theorist from South Carolina who served as the seventh vice president of the United States from 1825 to 1832. He is remembered for strongly defending slavery and for advancing the concept of minority states' rights in politics. He did this in the context of protecting the interests of the white South when its residents were outnumbered by Northerners. He began his political career as a nationalist, modernizer, and proponent of a strong national government and protective tariffs. In the late 1820s, his views changed radically, and he became a leading proponent of states' rights, limited government, nullification, and opposition to high tariffs. He saw Northern acceptance of those policies as a condition of the South remaining in the Union. His beliefs and warnings heavily influenced the South's secession from the Union in 1860–1861.

Calhoun began his political career with election to the House of Representatives in 1810. As a prominent leader of the war hawk faction, Calhoun strongly supported the War of 1812 to defend American honor against British infractions of American independence and neutrality during the Napoleonic Wars. He served as Secretary of War under President James Monroe and, in that position, reorganized and modernized the War Department. Calhoun was a candidate for the presidency in the 1824 election. After failing to gain support, he agreed to be a candidate for vice president. The Electoral College elected Calhoun for vice president by an overwhelming majority. He served under John Quincy Adams and continued under Andrew Jackson, who defeated Adams in the election of 1828.

Calhoun had a difficult relationship with Jackson, primarily because of the Nullification Crisis and the Petticoat affair. In contrast with his previous nationalism, Calhoun vigorously supported South Carolina's right to nullify federal tariff legislation that he believed unfairly favored the North, which put him into conflict with unionists such as Jackson. In 1832, with only a few months remaining in his second term, Calhoun resigned as vice president and entered the Senate. He sought the Democratic Party nomination for the presidency in 1844 but lost to surprise nominee James K. Polk, who won the general election. Calhoun served as Secretary of State under President John Tyler from 1844 to 1845. As Secretary of State, he supported the annexation of Texas as a means to extend the slave power and helped to settle the Oregon boundary dispute with Britain. He returned to the Senate, where he opposed the Mexican–American War, the Wilmot Proviso, and the Compromise of 1850 before his death in 1850. Calhoun often served as a virtual independent, who variously aligned, as needed, with Democrats and Whigs.

Later in life, Calhoun became known as the "cast-iron man" for his rigid defense of white Southern beliefs and practices. His concept of republicanism emphasized approval of slavery and minority states' rights as particularly embodied by the South. His concept of minority rights did not extend to enslaved black people, and he owned dozens of slaves in Fort Hill, South Carolina. Calhoun asserted that slavery, rather than being a "necessary evil," was a "positive good" that benefited both slaves and owners. To protect minority rights against majority rule, he called for a concurrent majority by which the minority could block some proposals that it felt infringed on their liberties. To that end, Calhoun supported states' rights and nullification through which states could declare null and void federal laws that they viewed as unconstitutional. Calhoun was one of the "Great Triumvirate" or the "Immortal Trio" of Congressional leaders, along with his colleagues Daniel Webster and Henry Clay. In 1957, a Senate Committee, headed by Senator John F. Kennedy, selected Calhoun as one of the five greatest senators of all time.