The Enfield 1853 rifle-musket was also used by both the North and the South in the American Civil War, and was the second most widely used infantry weapon in the war, surpassed only by the Springfield Model 1861 Rifled Musket. The Confederates imported more Enfields during the course of the war than any other small arm, buying from private contractors and gun runners. It has been estimated that over 900,000 P53 Enfields were imported into America and saw service in every major engagement from the Battle of Shiloh (April, 1862) and the Siege of Vicksburg (May 1863), to the final battles of 1865. The gun was highly sought after in the Confederate ranks. According to a survey taken by British officials during the early stages of war on the arms of the Western Confederate Forces, nearly 70% were armed with smoothbore arms, such as the Model 1842 Springfield. Later in the war the same survey was taken, they found that more than 75% had acquired a rifle, mainly the Pattern 1853 Enfield. 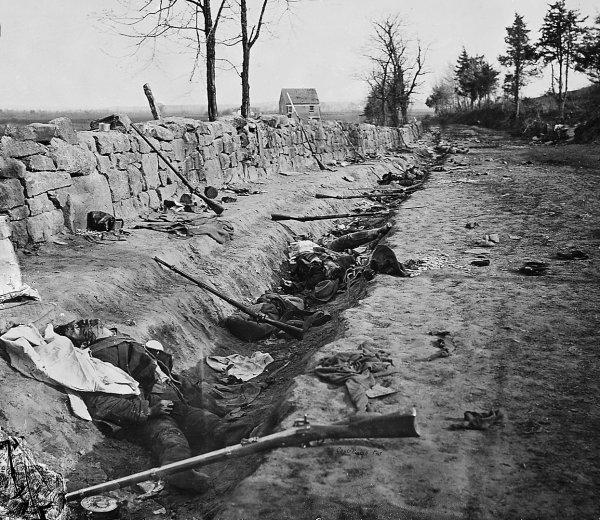 Confederate dead after the Second Battle of Fredericksburg on May 3, 1863. A number of Enfield 1853 rifled muskets are visible.