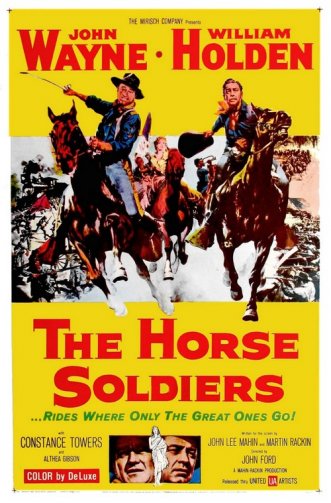 The Horse Soldiers is a 1959 American adventure war western film set during the American Civil War directed by John Ford and starring John Wayne, William Holden and Constance Towers. The screenplay by John Lee Mahin and Martin Rackin was loosely based on Harold Sinclair's 1956 novel of the same name, a fictionalized version of Grierson's Raid  in Mississippi.

A Union cavalry brigade led by Colonel John Marlowe (John Wayne)—a railroad construction engineer in civilian life—is sent on a raid behind Confederate lines to destroy a railroad and supply depot at Newton Station. Major Henry Kendall (William Holden), a regimental surgeon who is torn between duty and the horror of war, is constantly at odds with Marlowe.

While the unit rests at Greenbriar Plantation, Miss Hannah Hunter (Constance Towers), the plantation's mistress, and her slave, Lukey (Althea Gibson) eavesdrop on a staff meeting as Marlowe discusses his battle strategy. To protect the secrecy of the mission, Marlowe is forced to take the two women with him. Initially hostile to her Yankee captor, Miss Hunter gradually warms to him and falls in love with him, despite him being a Yankee. In addition to Kendall and Miss Hunter, Marlowe also must contend with Col. Phil Secord (Willis Bouchey), who continually second-guesses Marlowe's orders and command decisions.

Several battles ensue, including the capture of Newton Station, later a fire fight during which Lukey is killed, and a skirmish with boy cadets from a local military school (based on the actual Battle of New Market). After destroying the crucial supply line, and with Confederate forces in pursuit, the brigade reaches a bridge that must be stormed in order to access the Union lines. Marlowe's men rig it with explosive charges, and Marlowe bids Hannah farewell. Kendall chooses to remain behind with some badly wounded men—knowing he will be captured with them—rather than leave them unattended until Confederate medical personnel arrive. Marlowe, though wounded kisses Miss Hunter, lights the fuse and leads his troops across the bridge before it is destroyed, halting the Confederate advance. Their mission accomplished, he and his brigade continue on toward Baton Rouge.